J.C. Penney was an innovator in the retail industry in the United States and contributed to the way we shop today. That we typically don't haggle over prices in stores can be partially attributed to J.C. Penney's firm belief that prices should be low, set, and marked. The typical practice when Penney started in retail was to bargain for items. The initial price was determined by a salesclerk's judgment of the customer's appearance and dress. J.C. Penney also set

many other standards in early retail that provided the foundation for contemporary retail practices.

J.C. Penney was born in 1875 on a farm just outside of Hamilton in Caldwell County, Missouri. His father, James Cash Penney, Sr., a farmer, minister, and civic leader along with his devout mother, Mary Frances Penney, influenced Penney's lifetime ethics. Penney lived his early life by the Golden Rule and the influence was life-long. He started in retail in Hamilton as a clerk and later moved to Colorado, where he worked for and eventually owned the Golden Rule Stores. While the name of the chain of stores was ironic in itself, these are the stores that became the foundation for the J.C. Penney Stores.

Three years after Penney was born, the large Penney family of 12 children moved from their 390 acre farm to Hamilton, a nearby town of 2,000 residents founded next to the Hannibal & St. Joseph Railroad.

As they continued raising cattle and food on the farm, they began participating in Hamilton's social, business, and political activities. Residing in town also made it easier for the children to attend high school, and Penney's parents, who graduated from private academies, wanted their children to be well educated. 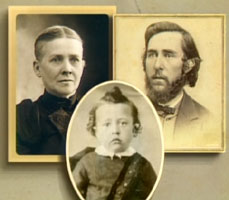 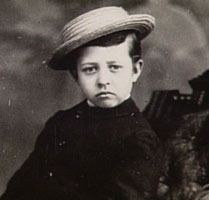 Penney's formative years were influenced by a combination of farm labor and involvement in town activities, by his family's religious and political principles, and by his family's financial difficulties. Although Penney's father was a figure of some consequence in the community, he was constantly short of cash. When Jim, as he was called, was eight, his father told him he would be responsible for purchasing his own clothing. Over the next few years, young Penney worked on surrounding farms, growing watermelons, trading horses, and raising pigs in Hamilton. Neighbors soon objected to the odors, and he was forced to close his fledgling business. When he was much older, Penney liked to recount the story of his first business venture. Penney's mother also instilled Penney's extreme courtesy at an early age by requiring him to tip his hat to trees as they walked down the street. 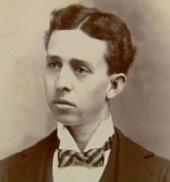 Penney wanted to attend college after he graduated from Hamilton Public High School in 1893, but his parents could not afford the expense. He worked on the

family farm for two years until his father asked a Hamilton merchant to teach him the dry goods business. The new endeavor was a good match. After an initial rough period with the more experienced clerks, who were more aggressive, Penney learned the art of salesmanship. He overcame his initial shyness and was soon he was the most successful clerk at the J. M. Hale & Bros. store (click on photo at left for a closer view) and was saving money to open his own store.

The ability to overcome obstacles and hardships was vital to Penney's later life.

In June 1897, concerned about his diagnosis of early stages of tuberculosis and following his doctor's advice, Penney left Missouri for the drier climate of Colorado. He first purchased a butcher shop and bakery in 1898 in Longmont, a small town near Denver. This venture failed after Penney refused to supply liquor to a hotel cook as an inducement for the hotel's business.

Depiction of the butcher shop in Longmont, Colorado 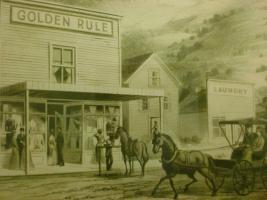 Penney then became a sales clerk at the Golden Rule Store, a Longmont dry goods and clothing store owned by Thomas M. Callahan. Callahan and W. Guy Johnson, his partner in a Golden Rule Store in Wyoming, were impressed by Penney's hard work. They offered him a position in their Evanston, Wyoming, Golden Rule Store, beginning the road to Penney's greatness as a retail innovator.

Penney's Visits and Philanthropy to Hamilton

J.C. Penney never forgot his ties to Hamilton and returned often for visits. He contributed both capital and spirit to instill pride in the community. Penney was instrumental in Hamilton's economic development. 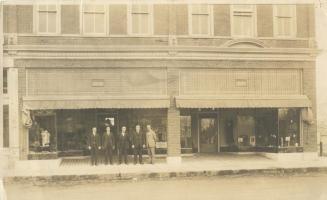 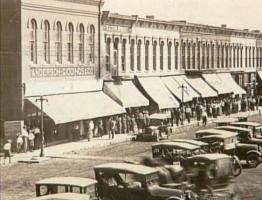 As soon as his first employer, J. M. Hale retired,
Penney opened the 500th J.C. Penney store in his hometown. 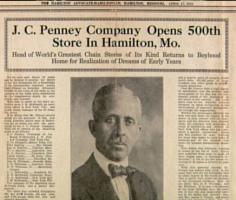 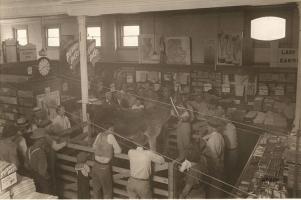 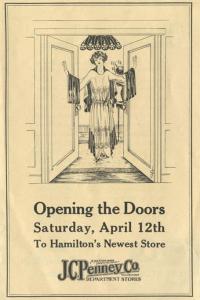 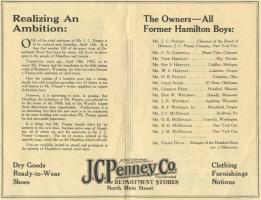 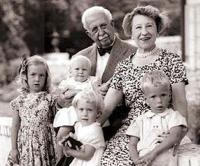 He also bought a house in town, renting all but one room of it to the manager of the store. He kept that room for his frequent visits to Hamilton. Local residents recount that during visits to Hamilton he'd often work in the store, sweeping the floor, stocking displays and waiting on customers. 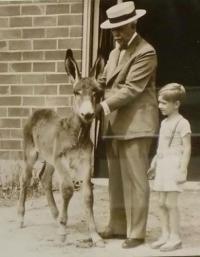 Penney purchased a farm east of town (see video) and made it an agricultural showplace during the Depression. The farm featured draft horses and Angus cattle and was well known among show animal breeders. In 1938, he sponsored a field day at the farm that attracted 8,000 people to view and judge for themselves the fine blood lines of the animals.

J.C. Penney helped fund other significant Hamilton projects including the first library, Highland Cemetery, the high school, and even a shoe factory.

Penney donated $10,000 to build the public library on the condition that local residents raise $5,000 to purchase the site and furnishings. He donated money for an all-weather road to Highland Cemetery. Penney placed significance on a good education and donated funds for building the new Hamilton High School in 1951 and for a junior high addition in 1956. The school is named J.C. Penney High School in his honor. 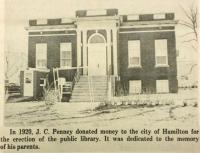 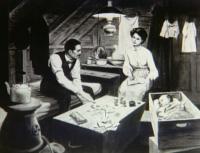 He also contributed to the American Legion Memorial Park, made a gift to the Kidder Institute College Endowment Fund, and was a stockholder of the Hamilton Bank when it opened in 1938.

J.C. Penney knew the economic impact of manufacturing to communities and wanted Hamilton to have a factory. He approached officers of the International Shoe Company and pledged to purchase of the entire production of children's shoes if they were to establish a shoe factory in Hamilton. The first pair of children's shoes produced in that factory is now on display in the Penney Museum.

Penney valued men more than property and initiated a unique partnership plan whereby a manager of a store could work hard and save enough money to buy a store of his own. In turn, he would train another man to become a manager, and the cycle would start over again. Many of the men were small town boys like him. To put them on an equal footing, they were not called employees but "associates." Today, all Penney company associates may take part in the profit sharing plan begun by the founder. 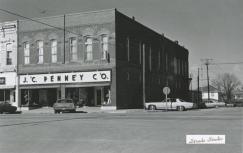 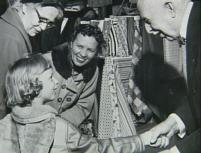 When the Penney Company incorporated in 1913, a list of principles was drawn up to guide the company in its business practices. The principles known as "The Penney Principles" are:

"Young man, at the Penney company, we don't sit down until afternoon,"
said J.C. Penney before posing for this picture.